The Strange Case of Jekyll and Hyde: Part II

As promised, here are a few production photos from Lung Ha's The Strange Case of Jekyll and Hyde. The combination of stage smoke and coloured lighting really added to the atmosphere and much use was made of the shadows and lighting, which looked incredible on a large set like this: 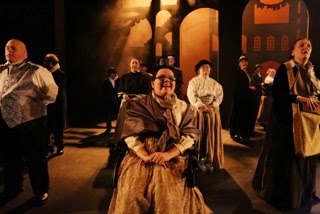 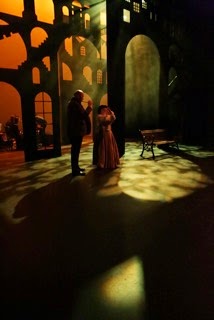 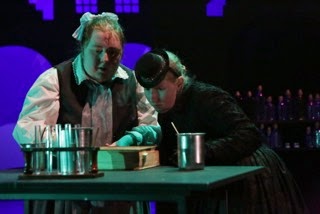 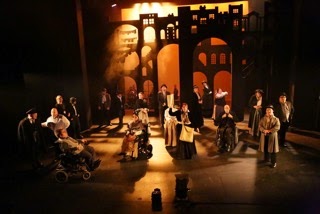 "Lung Ha Theatre Company and Drake Music Scotland have together pulled off an atmospheric reworking of RL Stevenson’s, The Strange Case of Dr Jekyll and Mr Hyde."  **** Edinburgh Guide

"The thematic assists from composer Greg Sinclair and the musicians of Drake Music work extremely well...a fleet and surprising adaptation of a famous story that really belongs to Edinburgh and which Lung Ha Theatre make their own."  **** Edinburgh49


"Together with a team of musicians and an ensemble cast bursting with spirit and passion, Lung Ha present a revitalised and genuinely enthralling tale."
***1/2 The Public Reviews

"Pearson has constructed a fascinating feminist reimagining of Stevenson's story which resets it in Victorian Edinburgh, the original city where politesse becomes a facade for a far darker Old Town underbelly. This leaves plenty of scope for light and shade in Caitlin Skinner's production, which navigates Lung Ha's regular ensemble of some seventeen performers through the big city bustle."  **** Sunday Herald


"This production, directed by Caitlin Skinner, proves that art has no boundaries, not even for the disabled: it is an exemplary piece of theatre" **** TV Bomb

"...featuring an outstanding, lyrical and pensive musical score by Greg Sinclair, played live by a six-piece band. Yet there’s even more than this, in Caitlin Skinner’s fine production." **** The Scotsman


The production goes on to Dundee this Wednesday (25th March) for one night at Dundee Rep.

The Strange Case of Jekyll and Hyde

I'm delighted to announce that Lung Ha's Theatre Company's new production of 'The Strange Case of Jekyll and Hyde' will feature a set design inspired by my laser-cut book.

The show opens this Thursday at the Traverse Theatre in Edinburgh before going on to the Dundee Rep laster this month.