A Knavish Lad: artwork from the exhibition 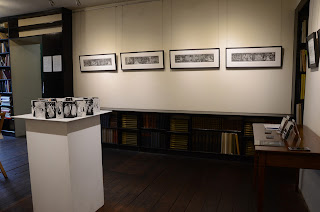 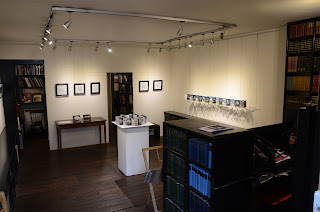 My exhibition A Knavish Lad featured the largest piece of book art I've created to date: a wordless, visual retelling of A Midsummer Night's Dream.  Today I thought it was time to give a bit of space on this blog to the other pieces of artwork from the exhibition, as there was so much etching involved!

Photos of above prints are taken from http://www.broughtonspurtle.org.uk/news/midsummer-night-enchantments

The first few etchings taken from the plates after aquatinting them came out so well that I decided to create a small limited edition of nine from each of them.  Each of these prints has been printed in black intaglio ink on Hahnemuhle paper.  They were the first prints taken on the plates after the aquatint had been scrubbed off, and the tonality on them is wonderful - none of the colour prints I subsequently took from these plates seem to match up to the contrast achieved on these first monochrome prints: 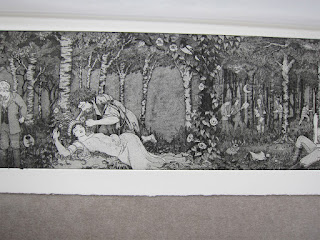 It took over two years to build up enough visual material for this project.  Research for it took me in to the woods of Northumberland's National Park with a sketchbook; to pouring over Victorian flower dictionaries; and to looking up indigenous costumes and headdresses of far off places. The Beltane Fire Society was consulted for their library of books on costume, and there were numerous conversations with a certain English teacher on the text and the characters.


The text's imagery informed a lot of detail in the etchings, especially in regard to animals, flowers and plants.  For instance in the scene when Hermia awakens, she speaks of a dream where a serpent had devoured her heart, and a small reference is made to this in the bottom right hand corner of the second print.  (An apple was substituted for a heart.)

The Roman gods Diana and Cupid are referenced many times in the play, and especially in the opening scene.  I didn't want to include them as characters anywhere in the etchings, as I felt that it would look too obvious.  Each of them appears in the opening scene as a laser-cut silhouetted statue, looking on while Helena sits alone underneath. 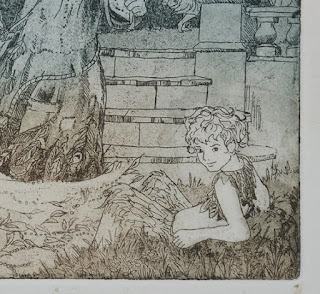 I could go on about the characters for longer, but I won't do it here.  However I can't finish this post without talking a bit about one of the most central characters, the instigator of the play's magic and mayhem... 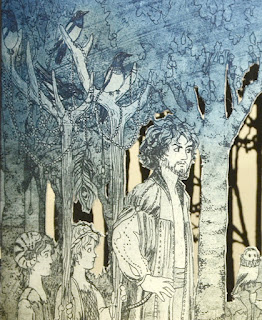 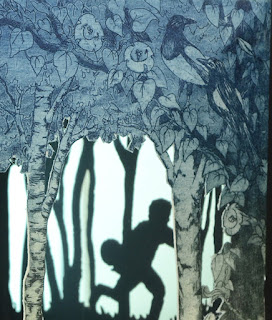 These last few framed etchings in the exhibition are my favourites.  They are also very precious because they cannot be printed again, thanks to a series of accidents in the print room with the plates.  Only a few copies of each print available:


The exhibition A Knavish Lad is on at McNaughtan's Bookshop and Gallery in Edinburgh until Friday 30th September 2016.

If you'd like to know more about any of the artwork or have questions about any of it, then drop me an email or leave a message in the comments section below! 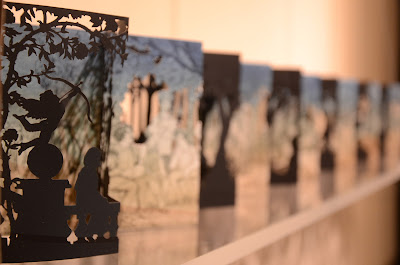 This latest piece of book art is finally complete!

A Midsummer Night's Dream is retold as a wordless narrative using a combination of old and new technologies: intaglio printmaking and laser cutting.  The result is a panoramic piece of book art that visually narrates the story and draws inspiration from the imagery of the text.

The book itself will be in a very small edition of only seven (eight including the display copy pictured here).  The display copy of it is currently on display as part of my exhibition A Knavish Lad at McNaughtan's Bookshop and Gallery until the end of September.  The exhibition also includes framed work, etchings, laser cut art and a black and white (pre-aquatinted) version of the book, which I will share more on in another post.


Enjoy the photos!  Any questions, comments or queries about the artwork are all welcome. 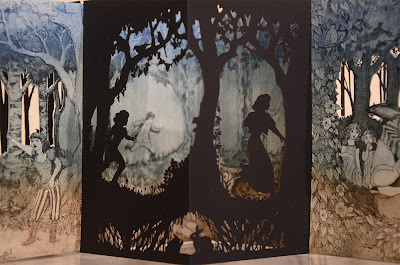 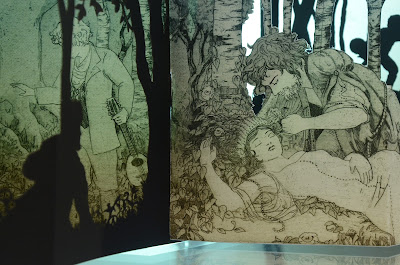 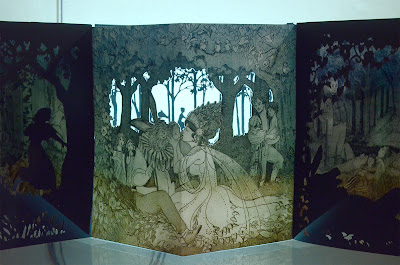 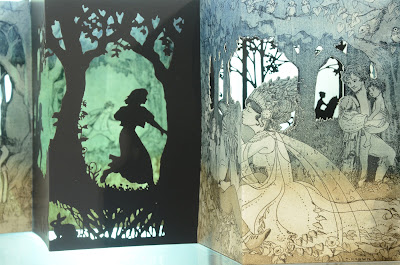 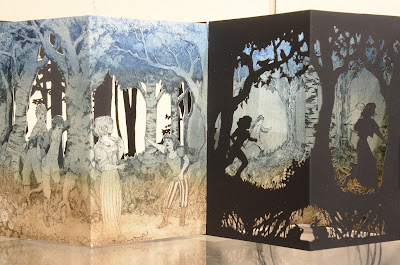 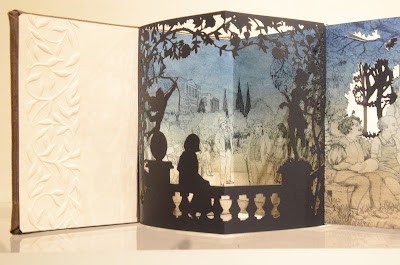 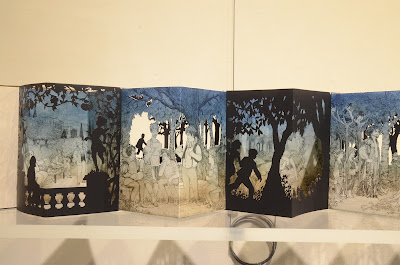 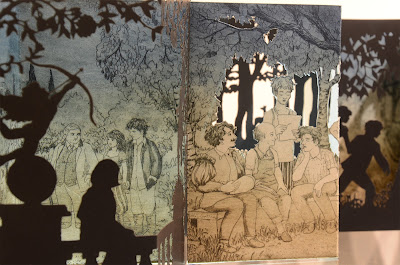 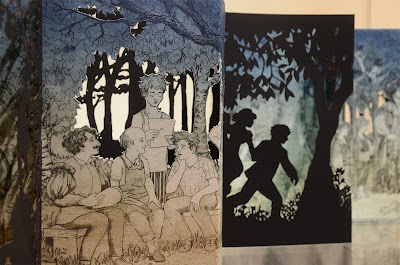 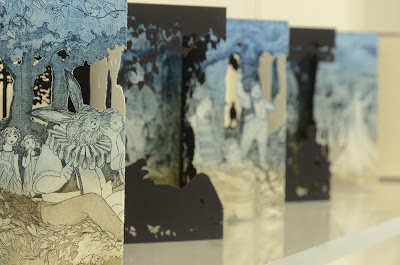 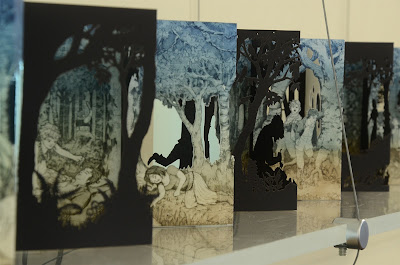 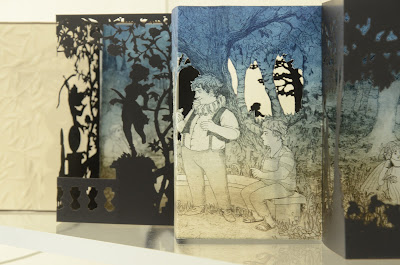 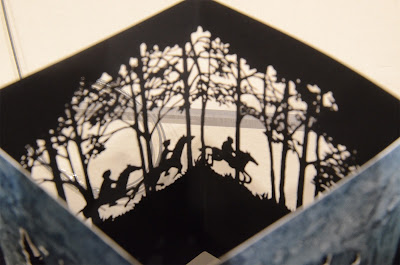 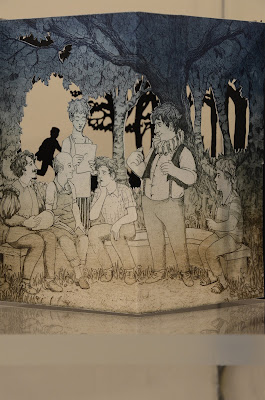 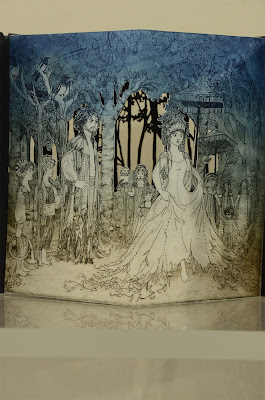 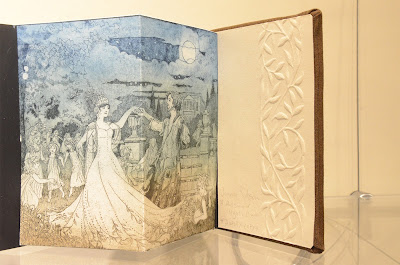 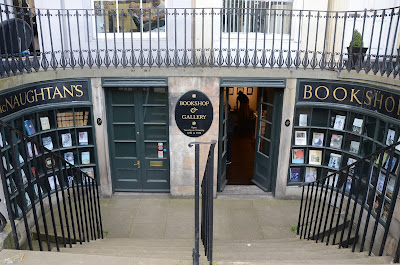